Standing in that starting corral, with thousands of people in front of me, and hundreds behind me, I should have been super nervous. Like, stomach-flipping, head-tripping nervous. I should have been internally freaking out about the fact that I was about to be tasked with running 13.1 miles – farther than I’ve ever gone.

I didn’t check my shoelaces. I didn’t think of the enormity of what I was about to do. I didn’t worry about having to pee or getting a cramp or feeling my knee seize up.

And, I think it’s because I just didn’t have time for that business. I had just two-wheeled it into the starting corral with my ridiculously inspirational running buddy, Jessica, after completing one helluva warm-up run. We may have left skid marks, but we didn’t check to be sure. 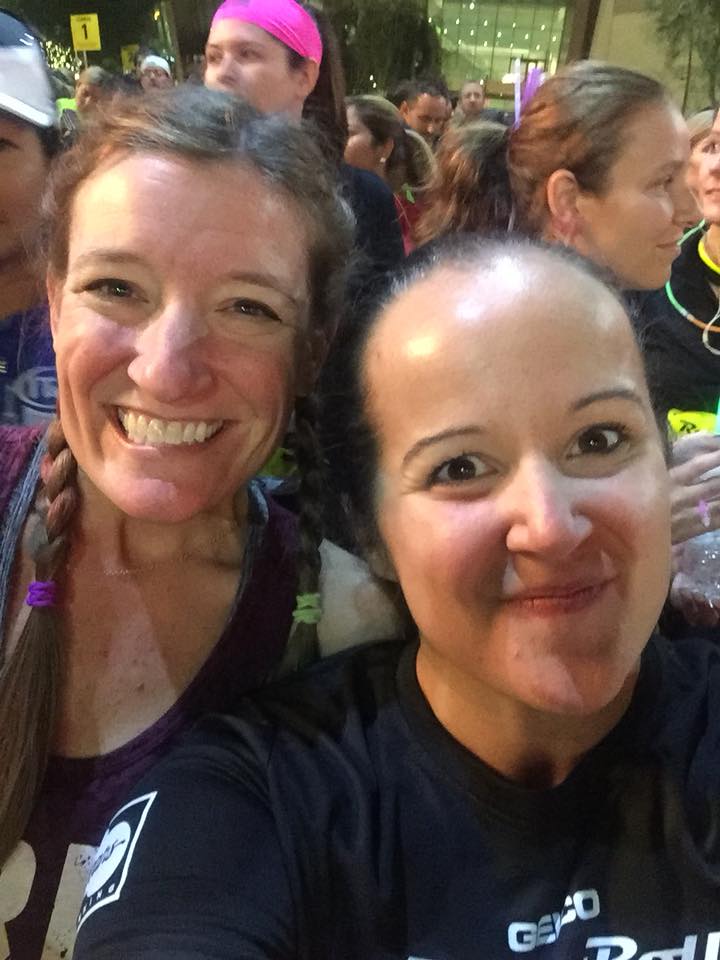 Yeah. We ran before our run. Which is like cleaning the house before the cleaning lady comes over, right? Or, in my mind, it was more like when boxers spar just enough to break a sweat before their big match.

That was us. A little less Oscar de la Hoya, a little more “Bridget Jones Runs Her First Half Marathon After Misjudging How Far Her Hotel Was From The Start Line.” Like desperate, crazy chicks who were just trying not to miss the half-marathon they’d spent the last six months training for.

Look, it wasn’t by choice. We’re thinking we clocked a couple miles, but it’s hard to measure with any precision when you’re running in between slot machines and dodging tourists offering smart remarks on the Las Vegas strip. Yes, buzzed dude with the loud mouth, we knew the race had already started, and yes, we knew it was on the street – not the sidewalk.

But, we were in a little situation. And our only chance to make the starting line was to double-time it through the crowds, across casino floors and into some random corral we weren’t even assigned to.

It had been a busy day. As we stood awaiting our turn to run, for real, watching the flames come out the top of the starting line with each wave of runners, we were only a couple hours removed from flying across Fremont Street on an epic zipline ride that sent us soaring 12 stories above old-town Las Vegas.

The $40 Slotzilla ride was a no-brainer. It promised to send us at up to 40 miles-per-hour, head first, over the crowds below that would look up as we squealed down that line. And it delivered on that promise. I remember laughing so hard as the line tightened, leaving us suspended but waiting to be released. When that door dropped, revealing the decision we just made, I couldn’t not scream.

And, lucky us. Ron snagged the go-pro footage of it all.

At the time, I thought it was the perfect distraction from pre-race jitters. Because, I’m pretty damn jittery before a race. Especially when 40,000 people are involved. At a distance I’ve never done. In a city I don’t know, one that was still recovering from tragedy, its reminders all along the route.

From the security at each intersection, where law enforcement stacked themselves against diagonally-parked city buses. To the #VegasStrong billboards. To the banners where runners stopped to write words of support. 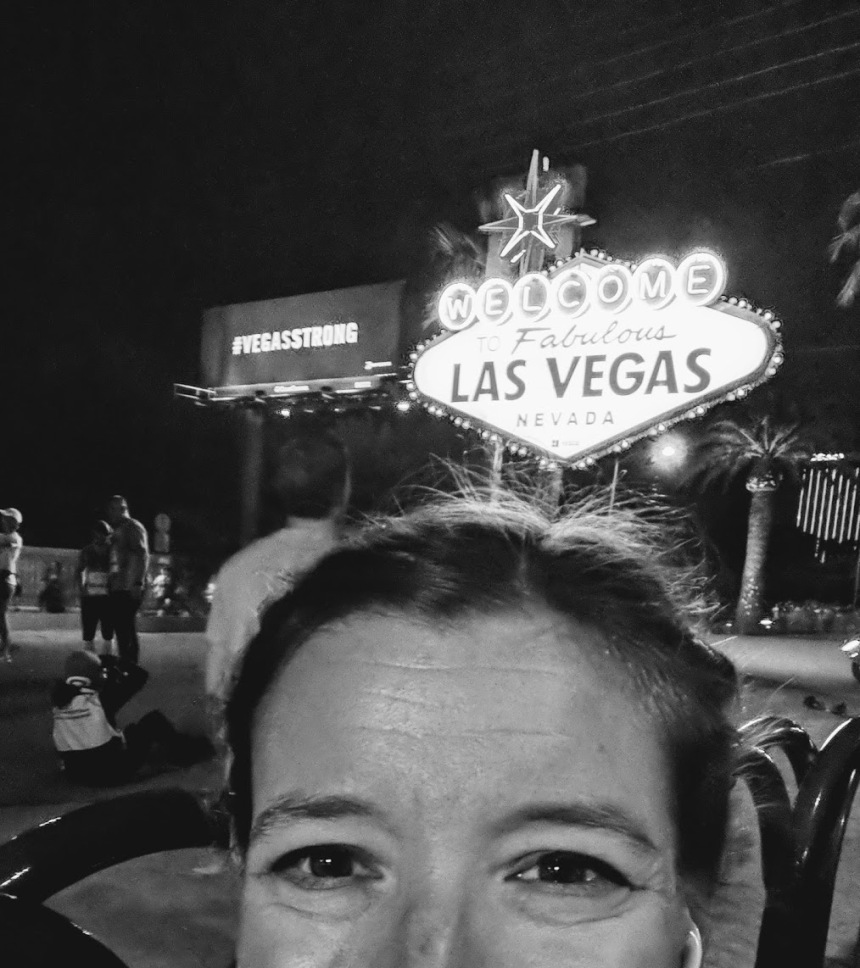 Reminders were everywhere. So, I just didn’t need to get in my head. Not before this run, in this city, with this tragedy in its wake. That zipline was a willing distraction. The pre-run run?  Not so much.

But, during that spontaneous warm-up run, Jessica and I kind of became other people. We shed our niceties and started barking. At each other and at hotel staff.

“WHERE’S THE MONORAIL STATION!” I barked two steps inside of Harrah’s at the first employee I saw.

“LISA! OVER HERE.” Jessica barked across the two aisles of slot machines that separated us.

“I CAN’T BELIEVE THIS!” A frustrated exclamation that came from both me and Jessica as we bobbed and weaved through traffic, jogging up escalators and apologizing to tourists who were in no hurry at all.

For good measure, we sprinkled a nice assortment of four-letter words along the way. We couldn’t help it. And it didn’t matter, since we were in a city that allowed a 50-something dude to stand in the great-wide-open wearing only a thong-sling-type thing to cradle his family jewels. We weren’t making anybody blush with our language, that’s for sure.

But, we were inhaling second-hand smoke, running through darkened showrooms, hoping like hell we could find the dang monorail because we needed to make up time, since we had 30 minutes to cover what our map told us would take more than an hour.

As a footnote, it takes nine years to get through a Las Vegas casino. And we were running!  We were running fast enough to break a sweat, and it was not warm out that day.

But that sweat only got us ready for the fight, I suppose. Because 13.1 miles ain’t easy. It’s doable, but it’s a challenge. I lucked out and floated through the midway point achieving that coveted runner’s high, but returned to earth as I began to realize how close we were to the finish line, where the snack pack of Pringles tasted like cuisine from the finest restaurant on the planet.

This is the only time I’ll say that, too.

We made it to the start line. We found the finish line. And we have the medals to prove it. Even though those medals only celebrate the half marathon, we both know we put down at least 15.1.

But, don’t people say the adventure is in the journey? Not always the destination? Totally understand that now. Because I’m pretty sure the salt on those Pringles wouldn’t have tasted as decadent without that desperate warm-up run through Harrah’s and New York, New York.