There are some places that just remind you of how tiny you really are. Running on a mountain, where your view is fogged by the clouds at 14,000 feet, is one of them. Standing under a series of stone arches that have been shaped by the elements over millions of years is another.

Lucky us, we got to experience both in the same trip. Because we like to maximize the minutes we’re given every day, we planned it so that our trip to Breckenridge for our Spartan Beast race would end with a magical exploration of Arches National Park.

That way we had a chance to feel double-tiny. For added punctuation.

While the race was grueling, and made me (at least) feel small thanks to its super challenging obstacles (I might have cried after the bucket carry), it was more the elements that gave us perspective.

Rain decided to show up for the first two hours of the race, chilling the day so much that it became difficult to feel my fingers to tie my shoes. And when the rain lifted, the clouds hung around, dragging along the top of the mountain that we had so foolishly agreed to run up as part of the race. 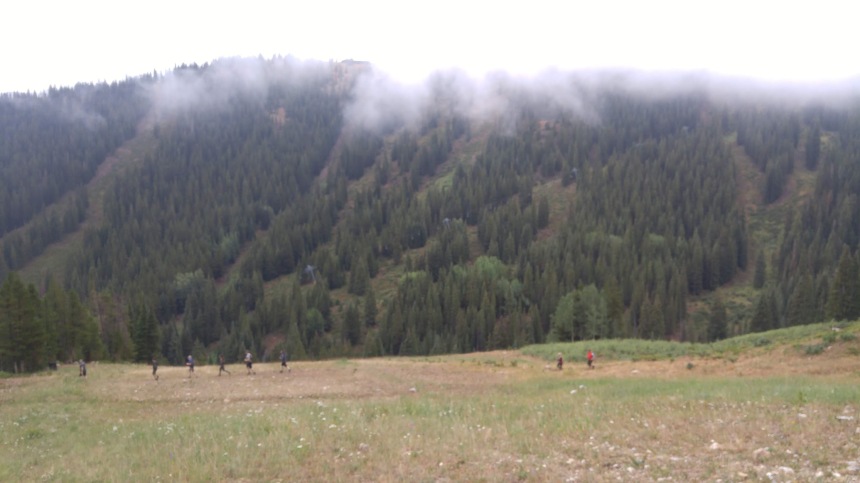 It gave the whole landscape a sort of mystical feel. And, it also reminded us that we had just climbed from 9,000 feet to 14,000 feet, up a slope skiers pay to slalom down. Another slice of perspective?  That we hung in step with a team of Air Force dudes.  Not that we want to enlist, but it was a solid confidence booster to know we could keep pace throughout the 13-plus mile race. 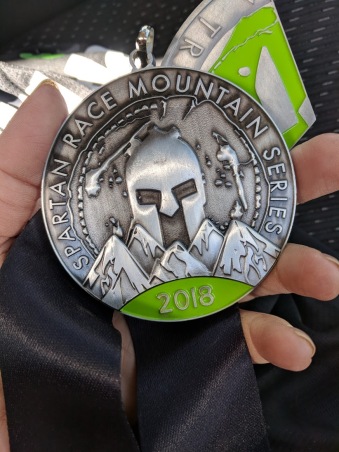 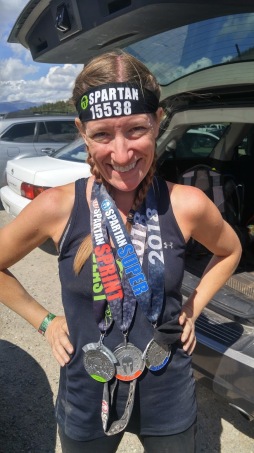 After collecting our coveted medals, and shamelessly changing in the parking lot, we hit the road again, just 48 hours after driving 12 or so to get there. We had to. We had a hot date with I-70 West. And, it was super romantic.

The highway didn’t light a candle or pay for dinner, but it left us breathless as it weaved through mountain passes near Vail, Aspen and my favorite, Glenwood Canyon. It’s an area surrounded by mountain walls, lush vegetation and the therapeutic Colorado River.

I say therapeutic because we soaked our aching legs and feet in its frigid flow for a bit, inadvertently serving as witnesses for a dude who caught a fish on his first cast, but quickly lost it as it flopped out of his hands.  That’s kind of the best part of these road trips – that we have the ability to pull off when we see something cool or want to try something new. It goes with our whole belief of capturing every minute.  And our love of feeling small.

While our KOA cabin in Moab did not make us feel small, it was adorably rustic and our stay was filled with minuscule mishaps. Like, the sheet we brought didn’t fit the big bed in the room, and instead only fit the twin bunk. So, we bunked. And, we forgot to pack towels for the shower, but were eternally grateful for the scruffy, brown paper towels that were available instead. It was the first time in my life I was grateful for those scratchy suckers.

Another thing we were grateful for?  The ranger inside the visitor center at Arches National Park. We told him we only had a few hours and we wanted to maximize them. He took our map, highlighted the best spots and sent us out – ahead of the tour buses, since we were there just after it opened.

This is pretty critical. If you’re going to do Arches, do it early.  Otherwise, it seems, many of the most accessible arches will be overrun with foreign and domestic tourists.  And the arches in that park are most majestic in solitude, without a zillion people walking under them. At the first few stops, near Balanced Rock, North and South Window and the Double Arch, we really were only a few minutes ahead of the crush of tour buses.

But, at Delicate Arch, the traffic was more manageable, likely due to the fact that reaching it involved a six-mile round-trip hike. As if we hadn’t burned our legs out enough the day before in Breckenridge. Luckily, the folks at Arches know traffic is a problem, and they’re considering a plan to manage it by permitting entry times – which would help a lot.

One of the coolest moments happened only because of our curiosity. As we neared the end of the hike to Delicate Arch, we looked up and saw a smaller arch above us and decided to check it out. It looked like a window, almost. When we got to it and looked out the other side, it was the first time we laid eyes on Delicate Arch, a massive, standalone arch that was still several hundred yards away. It was just one of those moments – one we might have missed if we we didn’t satisfy that “What’s up there?” question.

While we hit everything we had hoped to see in that brief visit, we know we’d love to go back and learn more. Camp inside the park, maybe, to get those priceless photos at sunrise or after the sun sets and the sky comes alive with countless stars.

It all reminds us that the universe will do what it will. And, we’re here to see its incredible show for just a little while. We’re kind of obsessed with all that. And feeling tiny. Arches and Breckenridge totally did that for us.