When I was a kid, I waited three years for a membership to our local athletic club. I asked and asked and asked. It was just as much a mecca for fitness as it was for socializing and snacking with my friends – obviously. And when I opened the Christmas paper that held the membership inside, my stomach flipped.

Flash forward a couple decades, and I have felt that same feeling a few times over. For waterfalls.

After ambitiously stalking the status of a certain trailhead, I learned today that the one I’ve been romancing for more than a year has finally reopened. And when I saw that, there went my stomach. Again.

Because, at the end of this certain trail is a waterfall. In the desert. Which is basically actual magic. I’m so smitten with this hike that I don’t even want to spill any details about it until we’ve done it.

And as I check calendars and consider the energy that we’ll uncover on that hike, I wonder what it is about waterfalls that gets me. Like, some people get geeked about smart watches or sneakers (guilty of that, too) or classic cars. But to me, there are few things more thrilling than witnessing a waterfall.

And, I say witnessing because sometimes you can’t get super close – even if you try. Sometimes it runs so hard and fast that you should probably just stand back, listen to it and admire it from a safe distance. 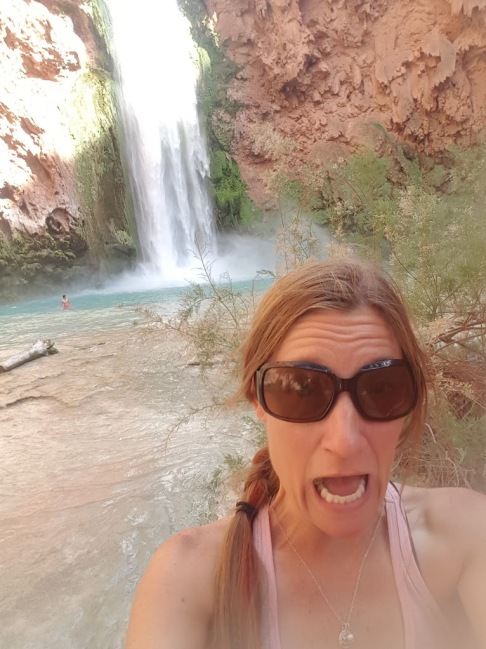 And, my love of them doesn’t discriminate. Skinny ones. Towering ones. Ones that flow over a few tiers until they pool at the bottom. The kinds that peek through cracks in a canyon wall, the kinds that only come after a heavy rain, and the kinds that are friendly enough to jump from.

I’m equally as mesmerized by all of them. They prompt a gasp, like the ones that suddenly appear along the Road to Hana, or the one we spotted along the highway in Colorado. And then, they deserve a minute, like the one that announced itself with its roaring crash before I could actually see it – that big, amazing spectacle in Havasupai.

Sometimes they surprise you, hiding just around a corner. And sometimes you have to work for them, hunt them out, follow the outflow, inhaling breathtaking scenery along the way – like following a rainbow for the pot of gold at the end.

So, while everyone universally overuses TLC’s song about waterfalls, I’ll keep chasing them. And now you’ll be singing that song for the rest of the day – just wait.