I’ve come to believe fruit flies might be superheroes with teleportation powers. Or, like, witches of the insect kingdom.

They just appear. Out of nowhere. And I feel like I can never catch ‘em. Even when I sacrifice a glass of red wine for the cause, I don’t catch them.

We did that last night. We keep a day’s worth of compostable food bits in a little bowl and grind it up when we have a few extra minutes and apparently the heat is starting to add some speed to the natural decaying process.

And the little flies were ALL OVER THAT BUSINESS.

I should have known. But, it’s like where the heck do they come from?  We have windows. And doors. We don’t live in a tent – although…we often romance the idea of sleeping outside while we’re at home.

Back to the flies though – they always know when to congregate, like kids on a playground waiting for a fight to start. Do they send a group text or something? 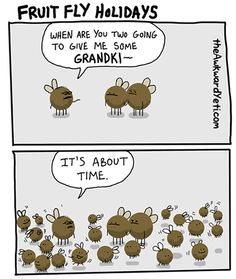 I thought about that last night, after grinding a bunch of stuff and tossing it in our outside bin.

Where the heck do they come from? How do they know? Does one signal another?  Do they get territorial?  Or are they all tiny hippies excited to share a big ol’ buffet of coffee grinds and egg shells and strawberry bits and cucumber ends?

But I couldn’t think about it too long. Because I had to fish one out of my beer, even as a swimming pool of red wine waited patiently for fruit fly kamikazes.

I guess I know how to get rid of them now.