We could see the smoke from a few miles away. A solidary billow of tan smoke was floating above a rocky area ahead of us as we drove back to Phoenix, and below it was a puff of dark, black smoke.

Within a couple minutes, traffic came to a stop along the divided highway that was out of cell range and up against a burning mountain about 20 minutes outside of Payson. 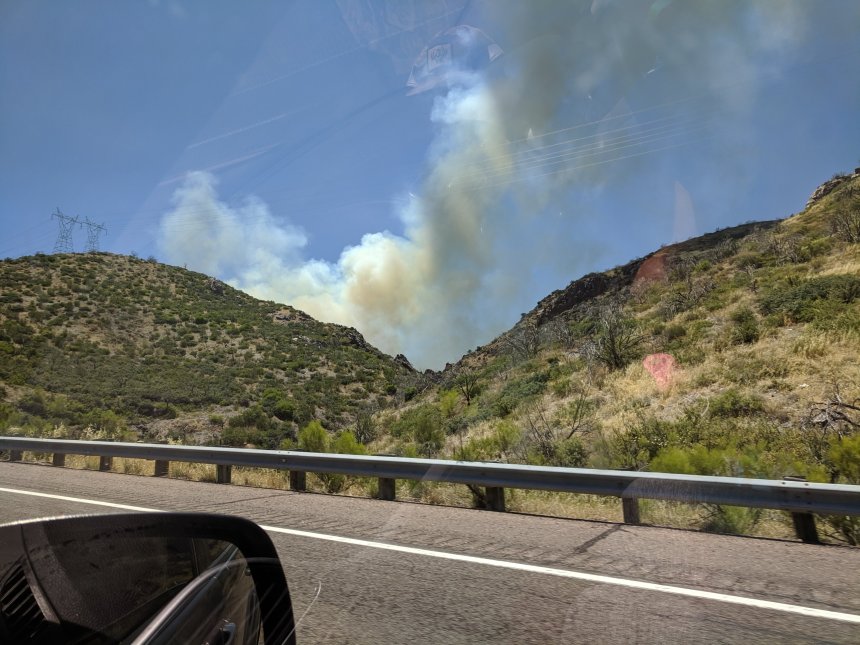 Everyone waited. Then slowly, people began putting their cars in park. Then folks decided to turn their cars off altogether.

It was clear we weren’t going anywhere. For a while.

We rolled down the windows and exploited the opportunity to catch a nap, for however long we’d get, because our morning had started right at sunrise and then included a filthy mud run at about 4,500 feet elevation.

When we opened our eyes again, some time later – like long enough to sneak in a twitchy nap – our entire rearview was hazy with smoke, which hasn’t stopped billowing over the side of the mountain.

It had, in fact, crept closer and lower to the highway. Additional fire trucks cruised passed us on the shoulder, including some that only carried water.

It was kind of getting intense.

And then the air tankers showed up, riding low over the smoke and giving us an up close view of its underside. And those were followed by the helicopters with the little water-filled balls dangling from the undercarriage. And a couple other aircraft came, too.

All within about a half hour, which to me, seemed surprising that they could get there that fast.

In traffic, folks were offering neighboring cars water. They were walking their tiny dogs with their tiny bladders. One guy was motoring up and down the shoulder on an electric skateboard thing giving fire updates to the rest of us who o my had boring old feet to use for transportation.

And we wasted time making jokes about the apocalypse as ash started to flutter down to our car. I mean, obviously.

It was about then that dudes started running down the shoulder towards our direction, and as they were we saw cars in front of us start to move. So we scrambled.

We could go! It had been about an hour and a half since we’d stopped. Almost. And I was starting to rationalize a path to a bathroom I’d have to invent if these hotshots didn’t get us moving.

But they did. And we saw the cause – a trailer had done something it wasn’t supposed to and it ended up ablaze, igniting nearby brush and setting a mountain on fire.

As we drove past the point where it all started, we could see a large team of yellow-clad firefighters getting a game plan together, we could see the flames dancing on the mountain top and we could hear the crackling of the brush and tinder as it was swallowed by the fire, that about an hour earlier didn’t even exist.

It’s just kinda crazy to see something like that up close. The smoke, then the response, then the fire.

And then to drive another half hour down the highway, passing no exits yet along the way, and seeing some dude hauling ass oblivious to the fact that his trailer ramp was down and scraping along the highway – right after seeing that burning mountain.

I’ve heard this quote before but it applies here…so aptly.

Conscience has a short memory.